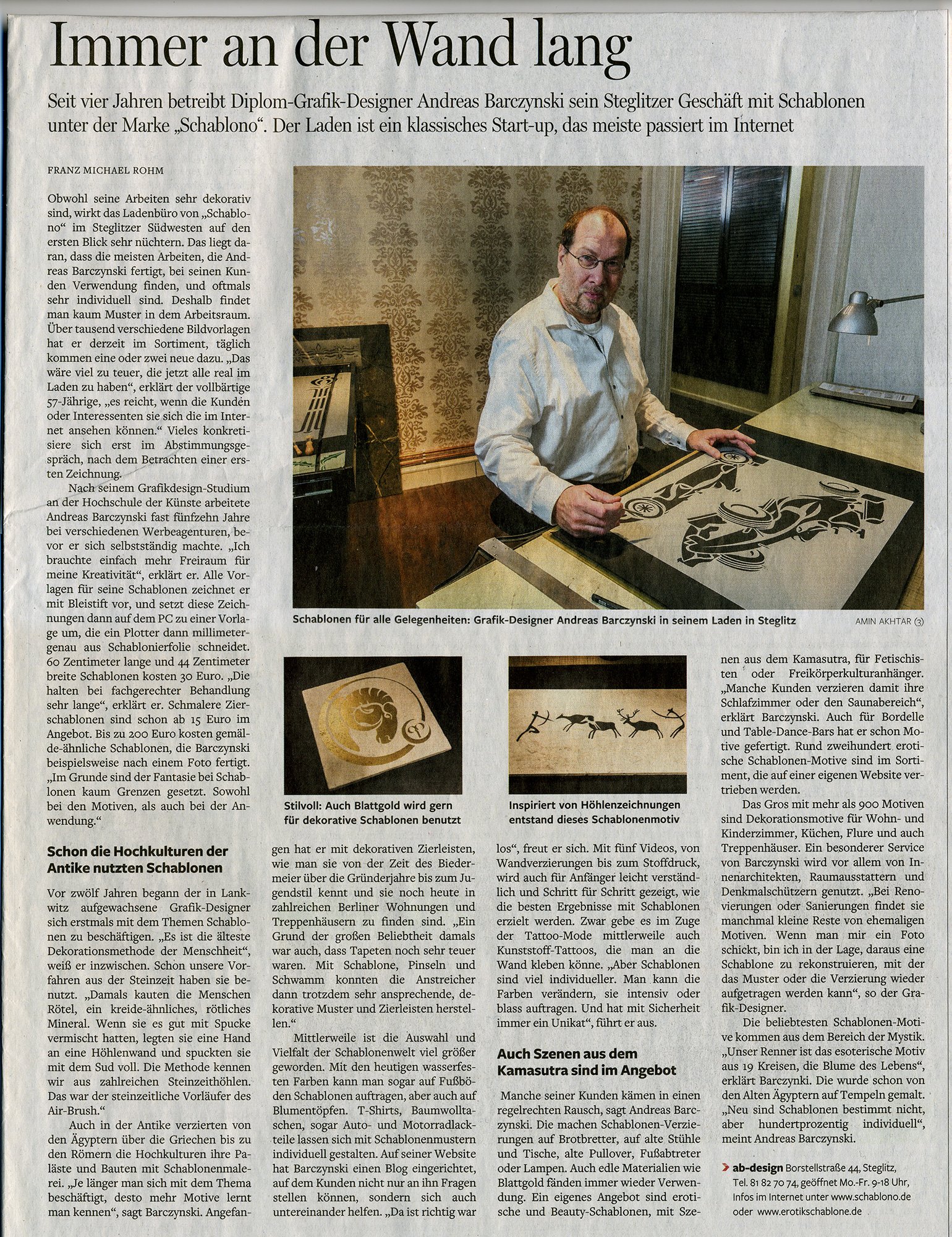 Andreas Barczynski has been running his business with stencils under the Schablono® brand through his advertising agency ab-design GmbH for four years. It’s a classic start-up, most of it happens on the internet.

Although his work is very decorative, the shop office of “Schablono” in the south-west of Steglitz looks very sober at first glance. This is because most of the work that Andreas Barczynski produces is used by his customers and is often very individual. Therefore, there are hardly any patterns in the work area. He currently has over a thousand different image templates in his range, with one or two new ones being added every day. “That would be far too expensive to have them all in the store now,” explains the bearded 57-year-old, “it’s enough for customers or interested groups to have a look at them on the Internet.” A lot of things only become more concrete in the meeting once the customer views the first drawing.

After studying graphic design at the University of the Arts, Andreas Barczynski worked for almost fifteen years for various advertising agencies before he went into business for himself. “I just needed more freedom for my creativity,” he explains. He draws all the templates for his stencils in pencil and then converts these drawings into a template on the computer, which a plotter then cuts out of the stencil film with millimetre precision. 60 centimetres long and 44 centimetres wide stencils cost thirty euros. “They last a very long time with proper treatment,” he explains. Narrower decorative stencils are available for as little as 15 euros. “Painting-like” stencils that Barczynski makes from a photo, for example, cost up to 200 euros. “Basically, there are hardly any limits to the imagination with stencils. Both with the motifs,

The graphic designer, who grew up in Lankwitz, began fascinated with the subject of stencils for the first time twelve years ago. “It is the oldest decoration method known to man,” he now knows. Our ancestors from the Stone Age were using them. “Back then, people chewed red chalk. When they had mixed it well with spit, they put one hand on a cave wall and spewed it full of the brew. We know the method from numerous Stone Age caves. That was the Stone Age forerunner of the airbrush.”

In ancient times, too, from the Egyptians to the Greeks to the Romans, the high cultures decorated their palaces and buildings with stencil painting. “The longer you deal with the topic, the more motifs you get to know,” says Barczynski. He started with decorative mouldings, as we know them from the Biedermeier period through the founding years to Art Nouveau and can still be found today in numerous Berlin apartments and stairwells. “One of the reasons it was so popular at the time was that wallpapers were still very expensive. With a stencil, brush and sponge, the house painters were still able to create very attractive, decorative patterns and mouldings.”

In the meantime, the selection and diversity of the stencil world has grown in size. With today’s waterproof paints, you can even apply stencils to floors and flower pots. T-shirts , cotton bags, even car and motorcycle paintworks can be individually designed with stencil samples. Barczynski has set up a blog on his website where customers can not only ask him questions but also help one another. “It’s gaining a lot of popularity,” he says happily.

With five videos, from wall decorations to fabric printing, it is easy to understand even for beginners. The videos show step by step how to achieve the best results with stencils. And with the rise of tattoo fashions, you can now produce plastic tattoos that can be stuck to the wall. “But templates are much more individual. You can change the colours, choose the intensity of the pigment. And it’s always unique, ”he explains. Customers make stencil decorations on breadboards, on old chairs and tables, old sweaters, doormats or lamps. Decadent materials such as gold leaf are also available on our website.

The majority of the 900 motifs are decorative motifs for living rooms and children’s rooms, kitchens, corridors and stairwells. And a special service from Barczynski is used particularly by interior designers, interior decorators and monument conservationists. “During renovations or refurbishments, she sometimes finds small remains of former motifs. If you send me a photo, I am able to use it to reconstruct a template with which the pattern or decoration can be reapplied, ”says the graphic designer.

The most popular stencil motifs come from the field of mysticism. “Our big hit is the esoteric motif made up of 19 circles, the flower of life, ” explains Barczynki. It was already painted on temples by the ancient Egyptians. “Templates are definitely not new, but they are one hundred per cent individual,” says Andreas Barczynski.

Press article in the Berliner Morgenpost about Schablono from February 14, 2017

All striked out prices refer to prices used to be charged at this shop.